JavaScript is the one language that works on all web enabled devices! JavaScript is everywhere and essential for making modern websites and apps accessible. Modern screen readers have excellent support for WAI-ARIA. Learn to use the W3C's WAI-ARIA spec to create modern HTML & JavaScript web applications. See how ARIA enhancements work in different combinations of the newest browsers and screen readers.

WCAG 2.0 Checklist that links to each understanding success criterion

Press the Left/Right Arrow Keys or Page Up/Down to navigate through slides, the Home key takes you home to the table of contents. Adjust text size in the Info dialog. Share this presentation on Twitter & Facebook.

The modern accessible web can be used by browsers and screen readers that support WAI-ARIA.

Can I use... WAI-ARIA Accessibility features

Surf's Up! - Surfing the Internet with JAWS and MAGic

VoiceOver & JAWS make guesses on unlabelled form inputs to try and help their users. NVDA does not guess which makes it a great testing tool!

Semantics is the science of meaning; in this case, used to assign roles, states, and properties that apply to user interface and content elements as a human would understand.

Definitions of States and Properties (all aria-* attributes)

A WAI-ARIA role is set on an element using a role attribute.

Use ARIA attributes to control styling:

A type of region on a page to which the user may want quick access. Content in such a region is different from that of other regions on the page and relevant to a specific user purpose, such as navigating, searching, perusing the primary content, etc.

Live regions are perceivable regions of a web page that are typically updated as a result of an external event when user focus may be elsewhere.

Examples of live regions include a chat log, stock ticker, or a sport scoring section that updates periodically to reflect game statistics.

Discrete user interface object with which the user can interact. Widgets range from simple objects that have one value or operation (e.g., check boxes and menu items), to complex objects that contain many managed sub-objects (e.g., trees and grids).

The following roles act as standalone user interface widgets or as part of larger, composite widgets.

The following roles act as composite user interface widgets. These roles typically act as containers that manage other, contained widgets.

The following roles describe structures that organize content in a page. Document structures are not usually interactive.

The following roles are regions of the page intended as navigational landmarks.

The following global states and properties are supported by all roles and by all base markup elements.

This section contains attributes specific to common user interface elements found on GUI systems or in rich internet applications which receive user input and process user actions. These attributes are used to support the widget roles .

This section contains attributes specific to live regions in rich internet applications. These attributes may be applied to any element. The purpose of these attributes is to indicate that content changes may occur without the element having focus, and to provide assistive technologies with information on how to process those content updates. Some roles specify a default value for the aria-live attribute specific to that role. An example of a live region is a ticker section that lists updating stock quotes.

This section lists attributes which indicate information about drag-and-drop interface elements, such as draggable elements and their drop targets. Drop target information will be rendered visually by the author and provided to assistive technologies through an alternate modality.

This section lists attributes that indicate relationships or associations between elements which cannot be readily determined from the document structure.

General Steps for Building an Accessible Widget with WAI-ARIA

Rich internet applications are complex to author. To save time, it is often faster to use existing widget libraries that implement WAI-ARIA and that have already gone through:

Make your JavaScript device independent to be accessible.

In CSS :hover only works with a mouse, use :focus anytime you use :hover to show keyboard focus

<a href>, <button>, <input> are focusable by default and natively keyboard accessible. You should build your custom JavaScript controls out of these elements so you don't have to manually add keyboard access. Languages with JAWS and MAGic on the Internet - Works on iOS

Use table headers <th> with scope attributes to provide a unique column and row header identifier for each data cell.

For complex data tables with two or more row or column headers the headers attribute is necessary on each data cell <td> with space seperated values pointing to the IDs of all its row and column headers.

Use a table caption with a heading element inside the caption. Summary not necessary on data tables, use the caption and easy to understand tables instead.

Layout Tables should never have data table attributes like summary, scope, headers. Don't use layout tables if CSS can do the job. WAI-ARIA role=presentation can suppress table cell semantics on a layout table and keep NVDA from announcing too much unnecessary info.

Internet Explorer default focus outline is MUCH harder to see.

Use CSS to enhance the visibility of user interface elements that are focused. jQuery Mobile's default focus indicator on UI buttons was too hard to see so I had to apply a custom outline with CSS.

Mobile Safari & VoiceOver for iOS have a bug where the <audio> and <video> elements are placed at the bottom of the focus order and you cannot give them a unique identifier.

NASA Podcasts all have Text Transcripts for each audio or video podcast!

Open source JS libraries like jQuery are evolving with more accessibility and WAI-ARIA support with each iteration.

YOU can contribute back to open-source projects to improve their accessibility for you and others.

Some closed-source libaries like Sencha's frameworks don't even have any semantic HTML elements and instead are built out of a bunch of <div>s.

A big problem with modal dialogs, e.g. a photo lightbox with a grayed out background, is that focus is not trapped inside the active dialog but instead stuck underneath the dialog inside the grayed out content.

ability to use the left/right arrow keys to switch between main menu items without forcing the user to tab through every single sub-menu item. This is more a problem for sighted, keyboard only users who don't have a screen reader that would allow them to bypass the entire navigation.

Many times the images have text embedded inside them which cannot be increased and often there is no full text alternative that matches the image text.

You could also use aria-expanded=true/false

Example 34 - Tab Panel - OpenAjax Alliance Accessibility Examples (PROBLEM WITH role=application in NVDA/Firefox) - problem is when you TAB away from the tab and focus on the first heading, NVDA will not read the heading, however, if you remove role=application this problem goes away. Good example of how role=application is DANGEROUS!

Don’t enforce timing in pages, or

Can also give user control over timeouts, length, use

Old fashioned JavaScript alert()'s work well to get the users attention even if they've left the browser window.

Modal dialogs may not get the users attention of they're working in another app. 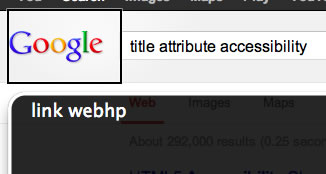 Titles will not work in mobile devices for sighted users, however, they will work with VoiceOver. On OS X VoiceOver reads the title attribute with an adjustable delay that is a bit long by default or the user can press VO+SHIFT+H to manually read it but they will not know of its presence unless they wait for the delay and hear it or manually activate it. VO calls it the Help Tag. On VO iOS the help tag (title) is spoken much faster than on OS X with no ability to manually activate it.

The thing that everyone forgets about title attributes is that for Low Vision, mouse users who are zoomed in at extremely high levels the title attribute appears as a tool tip when they mouseover the HTML elements with a title. So a large graphic or UI element may be cut off from view but the title would appear and explain what they're looking at.

The best accessibility criticism with title is that it does not work with the keyboard only or mobile devices. The browser developers could fix this though! By placing the label directly above the input you improve the experience for mobile and screen magnification users. When focus is in the input the label will no longer be cut off like in the below example of the Gmail sign up form where the label is placed to the left but cut off when viewed on an iPhone.

The Future of Modern Web Accessibility

address browser independence for gestures and others user interactions

For example, if a user wants to scroll down a page, they might use their finger on a touch screen, or click a scroll bar with a mouse, or use a scroll wheel, or press Page Down on a keyboard, or say "scroll down" with a voice command. All those different user actions can be translated into a simple IndieUI scroll event. (Specifically, scrollrequest(x/y), as shown in the illustration.)

This presentation and slideshow template is always evolving, most ALT text should be added and correct. Please contact me if there are any issues.

Press the Left/Right Arrow Keys or Page Up/Down to navigate through slides, the Home key takes you home to the table of contents. If you're using a screen reader you may need to use the pass through key first then hit arrow keys. Page up/down works with screen readers enabled without the need for a pass through key.

NVDA NVDA+f2: pass Next Key Through